My New York City post is finally here! It’s so long, so I apologize in advance, but I hope you enjoy hearing some details of our trip!

Connor and I had NYC on our calendar since around December, so I was SO excited for SO long. We planned to visit my best friend, Aislinn who moved to NYC after we graduated last year. We had a shared note in our phones that we added restaurants, activities, etc. to for months, so getting to check so many things off was really fun!

We left on Thursday night from Chicago. We decided to extend the long weekend by an extra day to make the trip even better. We landed in NYC at 11:30ish. LaGuardia was pretty crowded, so it took us awhile to find the bus that would eventually take us to the subway. After a long wait for the bus and some traffic leaving the airport, we made it to the subway. We took the subway to my friends and stopped for some late night food before. Once we arrived to her apartment, we went right to sleep to prepare for the next day.

Connor and I slept pretty late on Friday (later than I would have liked. We woke up around 9:30am). We headed to Manhattan to start the day and then meet up with Aislinn who took a half day. We got matcha lattes at Cha Cha Matcha to start. It was so good and one of my favorite parts of the trip. I wish we had one in Chicago. I got a regular hot latte and Connor got the “Beautiful Latte,” which was really good as well. We wandered around a bit more and I took a million photos. Then we met up with Aislinn. We headed toward Times Square (so crowded and I think it was my least favorite part of NYC) and then moved on to the Chinatown area. 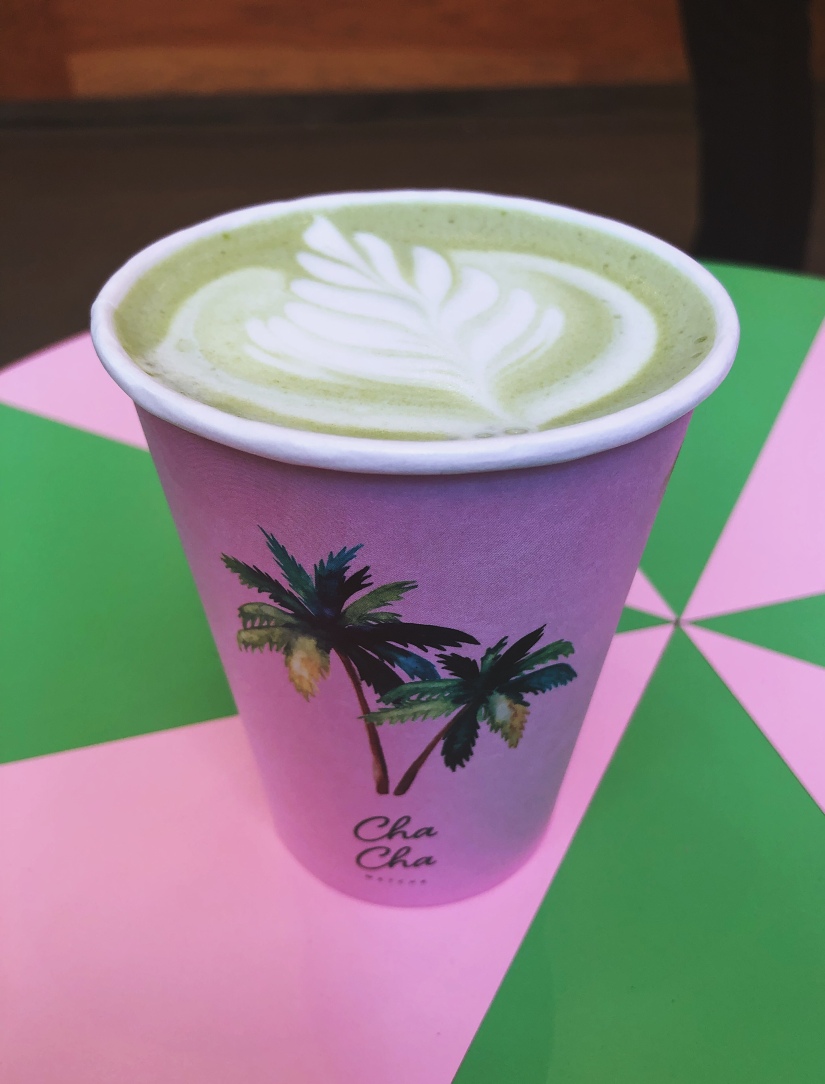 We headed to Glossier first. I love Glossier and there isn’t a pop-up in Chicago anymore, so I wanted to stop by. It was really nice and open. I tried out a few products I was interested in, and ended up grabbing 2 of them: a Lidstar in “Cub” and the eye cream, “Bubblewrap.” Connor was happy they had a really cozy bench for him to sit on while Aislinn and I explored the store. After Glossier, we were super hungry, so we got ramen in Chinatown. The place we chose was called Bassanova Ramen. We each got a different kind, and some edamame as an appetizer. Each was really good and definitely filled us up for awhile. 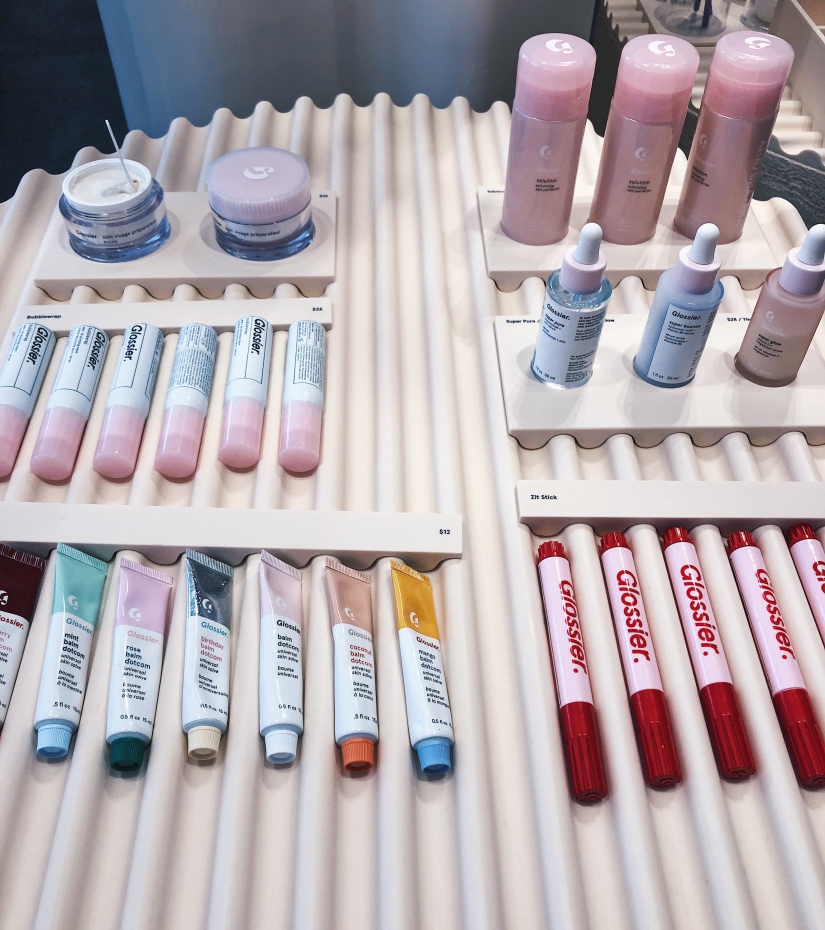 After roaming through Chinatown, we walked toward the Brooklyn Bridge. I was super excited about this and it ended up being one of my favorite parts. The walk to the main part of the bridge was kind of long, but the weather was really nice. It was also so crowded and bikes kept flying by, so watch out for the bikes for sure. We took some pictures and admired the view before turning back. We wandered around through a shopping area and some colorful murals.

Then we decided we should grab some ice cream and drinks. We walked further over near the water and got the yummiest ice cream at Big Gay Ice Cream. Connor got the “Salty Pimp” and Aislinn and I got “American Globs.” I think this was our favorite ice cream stop of the trip. I want to go back and try other flavors. We walked down the street to a place with outdoor seating and got a couple drinks to celebrate the first day! 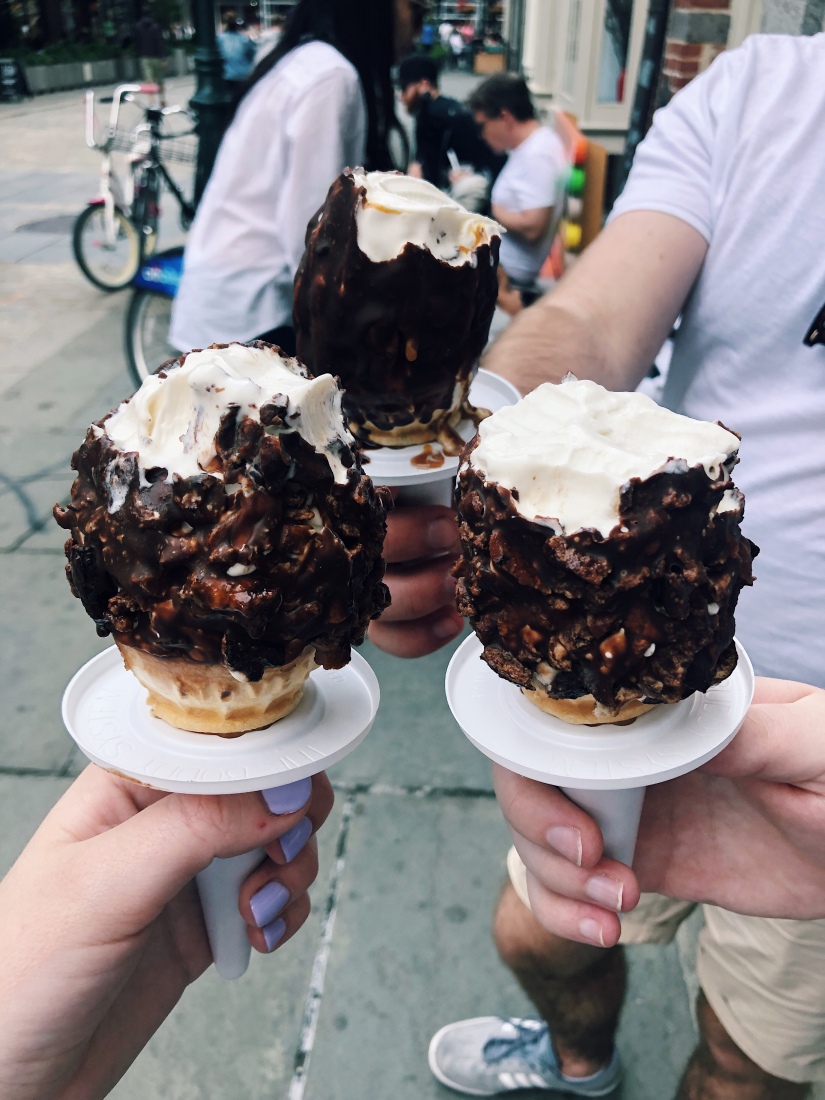 After drinks, we got back on the subway and headed back to Aislinn’s. We ordered some pizza for dinner to end the night. It was super yummy. Then we honestly went to bed since we were all so tired from the night before.

Saturday felt like a shorter day. We decided on a bottomless brunch at Randolph Beer. I was excited about the “brunch punch” rather than having mimosas. We each ordered some food and enjoyed the drinks. After, we headed to Cookie Dō for a treat. We each got a different flavor. I got the oatmeal m&m flavor. It was good but even the tiny cup was so filling and sweet. It was such a cute shop too! 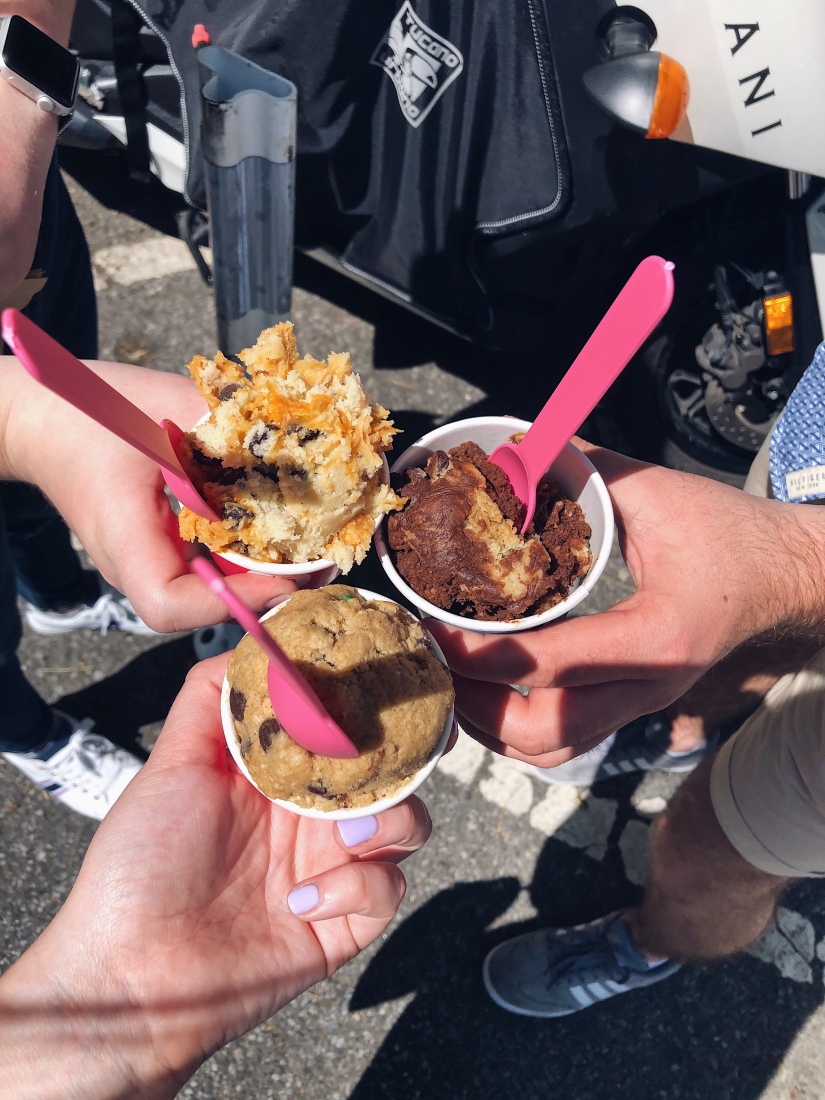 Then we went to Central Park. It was such a sunny day so it was perfect for walking around and being outdoors. We people watched and chatted with each other. Once we were super tired, we headed back to Aislinn’s. Aislinn wasn’t hungry, so Connor and I went to a ramen place. It was SO yummy! I love when ramen has a really nice broth and simple ingredients, and it was exactly that. Ramen was a great ending to our Saturday.

Sunday was our last day in NYC as we flew out the next morning. We had plans to pack a lot into the day starting with bagels, coffee, and a trip to the Empire State Building. We also planned to try a bunch of different restaurants and ice cream shops. We went up to the top of the Empire State Building (shoutout to Aislinn). It was so crowded and crazy going through the lines, but luckily we breezes through them. The view was really nice and it was great to see the whole city. We didn’t spend a ton of time up there due to the crowds, but I’m so glad we did it!

We were super hungry by then so we went to Browns Bagels. The spot Aislinn likes best was closed (I think it was called Best Bagels), so this was our next option. We each just got bagels with cream cheese because we planned on eating a lot of food that day (Connor: everything bagel with lox cream cheese, Aislinn: everything bagel with bacon and herb cream cheese, and Ellie: sesame seed bagel with veggie and herb cream cheese). The bagels were amazing and really hit the spot. We grabbed lattes at Gregory’s down the road and made a game plan for the rest of the day.

The next stop ended up being Chinatown. So many places I wanted to go to were in that area including some ice cream shops we wanted to try. We tried Milk & Cream and Stax Ice Cream. Milk & Cream definitely had the cutest ice cream. Stax was more unique in the fact the flavors weren’t the typical flavors and inside of a glazed donut. The textures/flavors worked great together. See my ice cream rankings below.

We also got sangria in Little Italy. The place we went was so empty, but we had a nice time. The patio was perfect for the warm weather. We also stopped in a few shops: Mulberry and Grand and Outdoor Voices. They were in the area, so I figured it would be fun! I ended up getting the cutest earrings, so I am pretty excited about them!

We continued our food tour at Tijuana Picnic. We got drinks and guacamole for a snack. The drinks were pretty good, but I would be interested to try more of the food. We just weren’t that hungry after sharing the ice cream! While at Tijuana Picnic, we realized Katz Deli was down the road. Connor really wanted to go there and Aislinn had heard good things about it, so we headed there next. Connor ordered a pastrami sandwich for later (he ended up eating it for breakfast on Monday morning before the flight). The deli was super cool though and very crowded! It is definitely a spot you have to try in NYC.

After Katz, we went back to Aislinn’s to rest up for dinner. We made reservations for 7pm, so we needed to get hungry again after our day of snacking. We hung out a bit and then went to dinner at Da Nonna Rosa. We each got pasta dishes. I went with a pesto dish and it was giant! I barely made a dent in it, but it was really yummy! It was a nice ending to the trip!

Other than dinner, we just hung out, watched a movie, and packed up for our flight in the morning. It was at 10am so we wanted to get an early start, especially since it was so crazy at LaGuardia when we got to NYC. Luckily, the trip to the airport ended up going really smoothly and it wasn’t as crowded.

Overall, it was such a nice trip. I’m so glad I got to experience NYC for the first time and spend a long weekend with my best friend! Also, all of the yummy food was such a highlight. If you haven’t visited New York, I really recommend it. I am already thinking of things I want to do on my next trip!

Here are some other random photos! 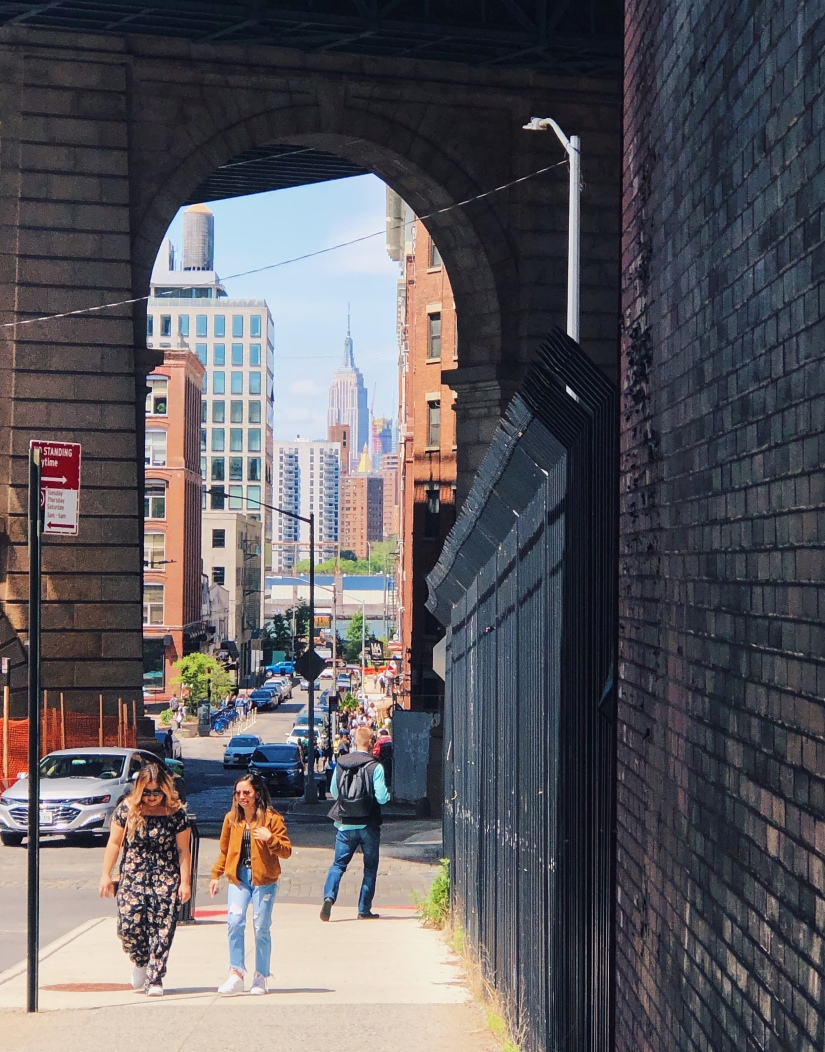 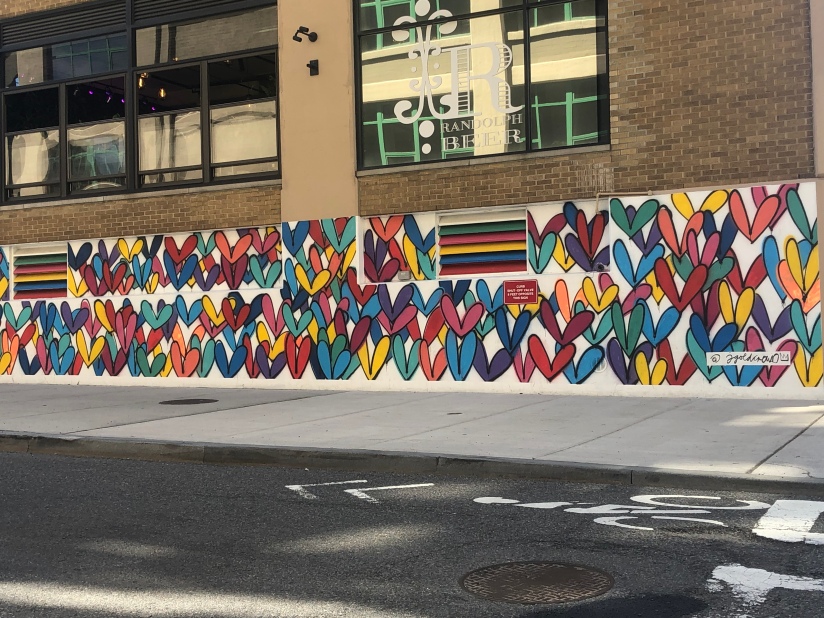 2 thoughts on “I Visited New York City For The First Time!”