It is finally time to post my food guide from my recent trip to Charleston with my family. I’m going to share some of the places we went and some of the vegetarian friendly foods I ate! These places have a lot of options for any food preferences, but because I am vegetarian, I wanted to share the yummy foods I ate.

The first place I saw when I got to Charleston was this donut shop. I feel like every foodie is on the hunt for donuts in a new city, so Glazed was the first stop. They have all the classics, but also some fun flavors that you may not typically reach for. If you are up early, give Glazed a try!

I really only chose to go to here because of the name, but it ended up being a vegan and vegetarian place. I got the breakfast bagel with portobello mushroom bacon, “cheese”, and a tofu scramble. It was yummy and a fun way to try some vegan substitutes. 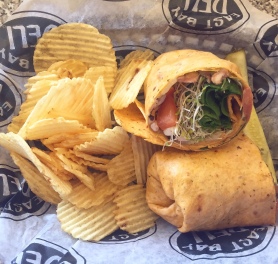 This was a more random, and unplanned stop for my family and I. We were on our way back from a tea plantation, so we were in need of some lunch. We saw East Bay Deli as we were driving back toward our hotel and decided to stop. I got a veggie wrap, and I don’t usually like wraps, but it was really good! So if you want a quick, classic lunch, East Bay could be a good stop. 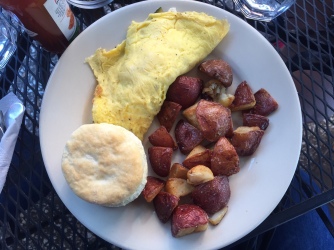 I am not usually a potato person, but I liked these potatoes. I loved my omelet. It had hominy in it, which I had never had before. I just looked it up to make sure I was right, but it is a type of corn. The service at Hominy Grill was fast and friendly. We did sit outside which ended up being a bad move because it was kind of chilly, but an overall great place to try in Charleston.

Initially, I was worried I wouldn’t like Husk because the menu is not very vegetarian friendly, unless you like salads, which I usually don’t. However, Husk surprised me. The waiter offered me the veggie plate, which has seasonal veggies. I wasn’t aware of what would be on it, but I was pleasantly surprised. As you can see from the photo, there is a ton of different veggies in the little bowls. All with their own flare and flavors. I loved each of the dishes, but I think the more Asian inspired dish and the more traditional medley of veggies were my favorites. Husk is pretty expensive, but the service, adaptability, and food overall make for a great dinner spot.

I LOVE Thai food, so I really wanted to try Basil. I got my usual Pad See Ew and it was delicious and super filling. I ended up taking home half of it and eating it a few hours later as a late night snack lol. I also got a mojito with my meal. I had never had one and it was a special that night so I had to try it, and it was so good! I am definitely going to have more mojitos in my life now. Like most of these restaurants, the service was really quick. It may have been because of the time (my sister and I went around 5:30), but regardless everyone was really nice.